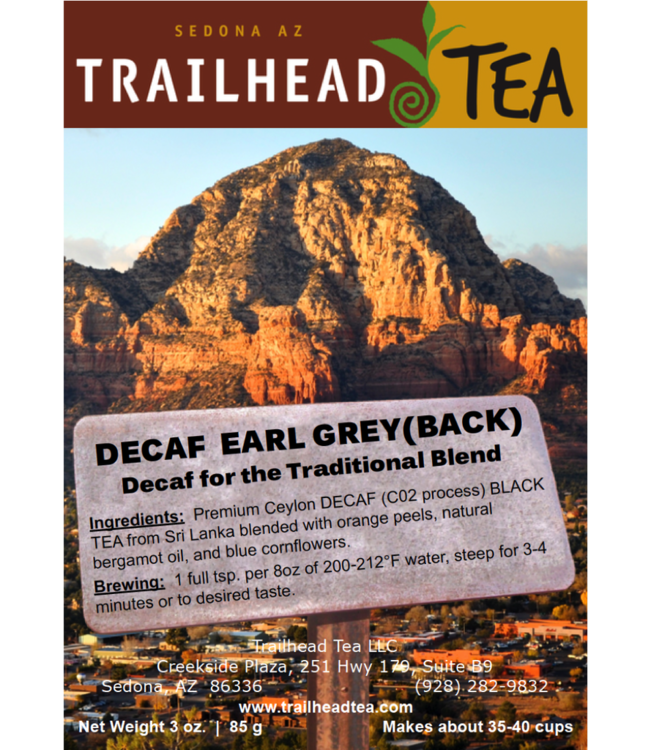 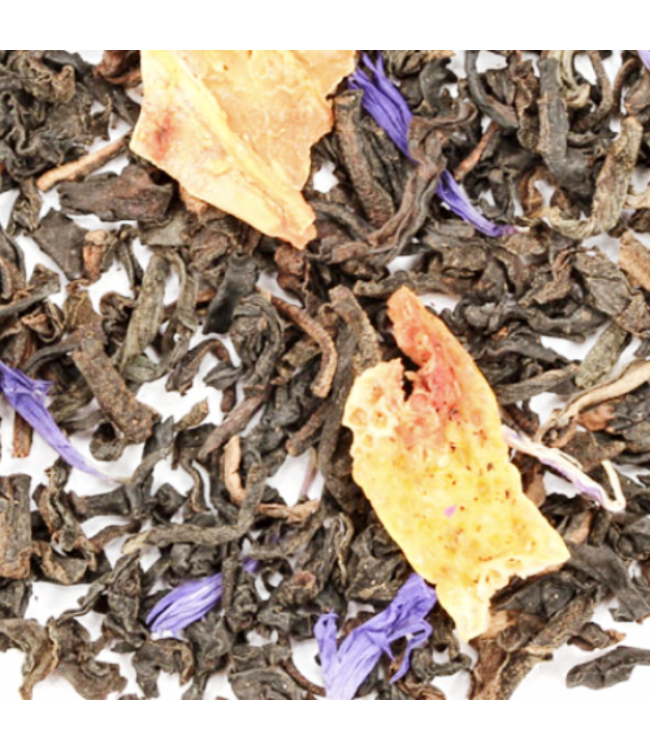 Decaf Earl Grey(back) Tea - Sedona Arizona's Full-Leaf Tea Store
The decaf version of the familiar and traditional blend. Premium Ceylon DECAF (C02 process that preserves the aroma and taste, verses typical chemical decaf) BLACK TEA from Sri Lanka blended with orange peels, natural bergamot oil, and blue cornflowers. Sedona note:The large rounded rock formation that towers over West Sedona is now known as Thunder Mountain or Capital Dome prior to that. Originally that formation was known asGreybackto earliest locals. So our tea, EarlGrey(back),is a nod to that history.
AVAILABLE AS:1 LB BulkPack,   3 OZ Package,   4 OZ Tin,   10 Teabag Package
Package size is 3 ounces of full leaf tea, which yields approximately 37-38 first cups. Tin size is 4 ounces which yields about 50 first cups. Bulk one pound is available for about 200 cups.  Teabags are single serving.
BREWING:Full teaspoon for every 8 oz of boiling 212°F fresh water.  Steep for 3-5 minutes or longer to desired taste.  A second or third infusion is possible by increasing steep time one minute each time.
Trailhead Tea:   Sedona & Northern Arizona's Full-Leaf Tea Department Store
Want to know more ?
Which myth of Earl Grey tea do you like best?:
- An originally pure Chinese tea that was lightly flavored with fine bergamot oil (an Italian/Mediterranean type of orange). This additional fragrance, which was provided by the Chinese, was intended to protect the tea from the taste of mold and tar which could arise from the long voyage at sea to England.
- The blend apparently named after Charles Grey, 2nd Earl Grey, and British Prime Minister 1830-1834, who enjoyed the tea so much and later gave to the Jacksons of Piccadilly who continued to produce it.
-The version of the tale involves a Chinese diplomat who presented the Earl with a tea he had specially formulated to mask the taste of lime in the Earl’s local water supply.
- Another rendition sweetens the plot by casting Charles Grey as a hero who saved the son of a Chinese official. In gratitude, the official sent Grey a supply of the flavorful tea.
But, we all know the real truth, that Earl Grey is the favorite hot beverage of Captain Jean-Luc Picard, Commander, U.S.S. Enterprise NCC-1701-E.

The decaf version of the familiar and traditional blend. Premium Ceylon DECAF (C02 process that pres..