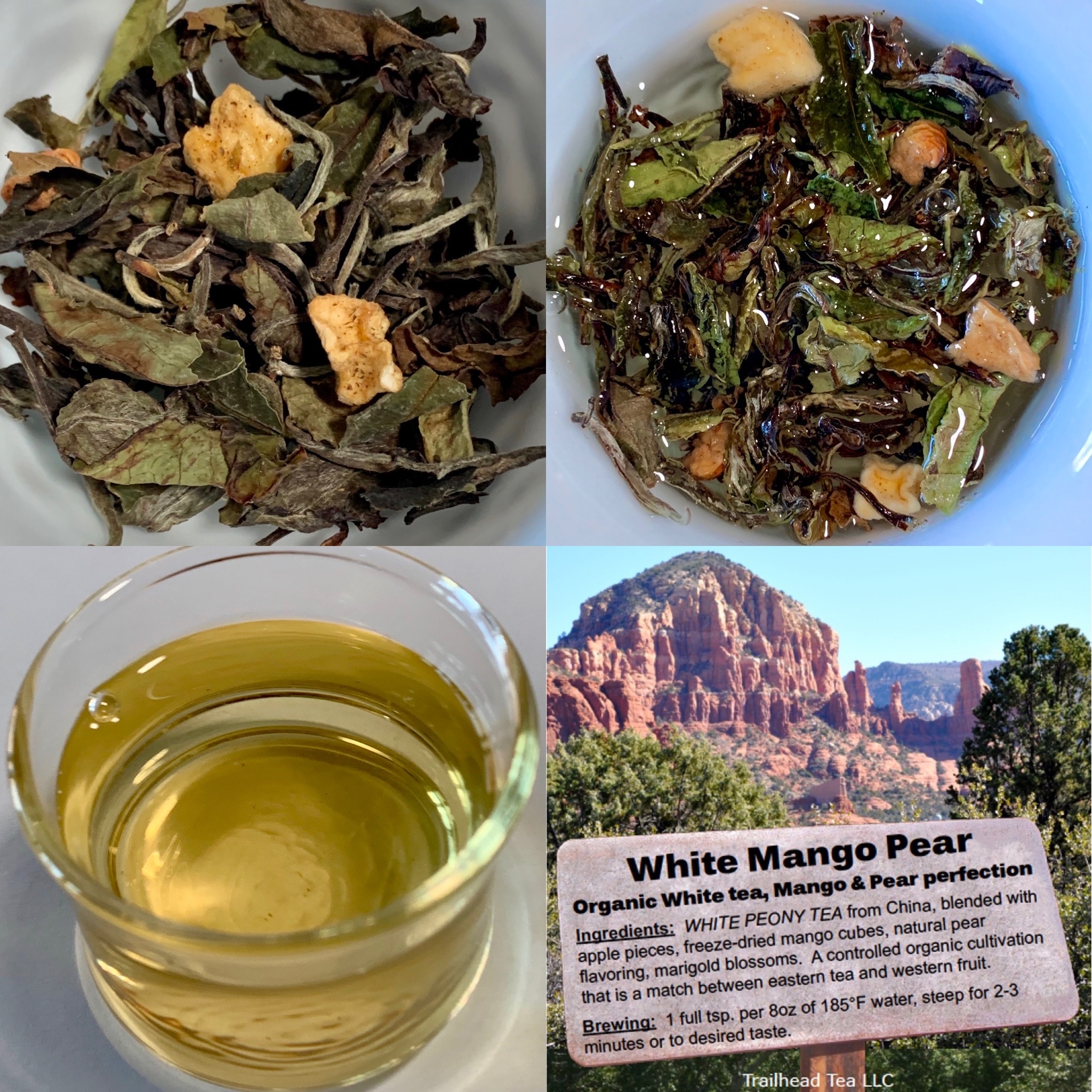 THIS MONTH IT IS ALL ABOUT WHITE TEA

The last couple newsletters we featured green and oolong tea information. If you missed reading or wish to review those, you can find THE GREEN TEA NEWSLETTER HERE, and THE OOLONG TEA NEWSLETTER HERE.  Make yourself a cup, and now let's discuss some info about white tea.

How is WHITE TEA different?
White tea is characterized as slightly fermented (meaning slightly oxidized), and both the leaves and brewed liquor are lightly colored. White tea brews a softly sweet drink, reminiscent of honey, slightly nutty, with slight hints of peach, cucumber or melon, and without any of the grassy flavors often found in green tea. White tea has the reputation as a simple production cycle, basically with the goal of "touching the leaf as little as possible”, and with the end appearance being a pile of dried leaves. There may be a minimum of steps, but it is still very difficult to master making white tea.

White tea is named for the luscious white down often covering the unfurled leaf bud, and to a lesser extent, the fresh new tea leaf. It originally came only from China, but as its popularity grew, other countries started producing similarly processed white tea. Historically, white tea was a powdered tea developed during the Song Dynasty (960–1279). During this time, the powdered white tea was sifted and placed at the bottom of a shallow bowl, where boiling water was added, and the tea whisked. As the tea was allowed to cool, the tea fell out of suspension, and the liquor was carefully consumed. The tea powder which settled to the bottom would not be consumed, but could be brewed again for the next cup. This method of consuming tea is what later inspired Japanese Matcha popularity.

Even in the best of years, white tea has a limited production. The weather conditions must be near perfect for plucking. It's picked in early spring (usually early April is best), before the buds open into leaves. The buds must be long and plump - not too thin, and not too long.  Producing white tea in the traditional way takes a lot more skill, time, and floorspace than it seems. After plucking, fresh leaves and buds are wilted in the shade to lose moisture. Then they are moved outside into the sun for exposure to slight fermentation (oxidation) and drying with the aid of a breeze. Hence the skill and judgement of the tea master, manually regulating proper shade, breeze, and sun. It is difficult to mass produce white tea. When the sun is too strong, or moisture content is too high, or if it’s too cloudy and takes too long for the leaves to loose their moisture, the tea can be ruined. Finally, white tea leaves are often finished by baking dry with charcoal ash on bamboo trays, or leaves can also be dried by the sun when the sun is strong enough. Unlike the production of other tea types, white tea is not exposed to the enzyme-deactivation step (halts oxidation permanently) with high heat. Because of this, white tea can be aged similar to Puer.

Examples of white teas?
All true tea, including white teas, are produced from the leaves of the Camelia Sinensis plant. Many historic tea-growing regions will have a natural, indigenous varietal of Camelia Sinensis unique to that area, that serves as the foundation for making a certain type of tea for that area. White tea is very prominent in the north and east Fujian Province where the ‘DaBai varietal’ flourishes. One of China’s ten most famous teas is 'Bai Hao Yin Zhen', which means ‘White Hair Silver Needle’, and refers to the highest picking grade of white tea produced.  Just as important as the grade, is where it's being grown and produced from specific locations. The very best Silver Needle has only two true origins, 'FuDing’ and ‘ZhengHe’, about a four hour drive apart in northern Fujian Province.  FuDing ‘DaBai varietal’ white tea plants produce slightly lighter colored tea than ZhengHe DaBai plants. Silver Needle and other white tea from other locations are not as desirable. Generally speaking, the quality and the cost of tea is determined by a combination of the picking grade, the varietal of the tea plant used, and the terroir and location of the harvest/production. Usually the location of the harvest/production can be most influencing. Silver Needle from FuAn would sell for less than a 'Shou Mei' from FuDing.

Choosing between “orthodox” or flavored WHITE TEA?
Flavored or scented white teas have one or more blended ingredients included that modifies the taste and aroma (and sometimes appearance). Since white tea is light and subtle in flavor, the flavorings blended with white tea also tend to be lighter.

As a general rule, “orthodox” natural unflavored/unscented tea is usually a higher quality choice since the taste/aroma/appearance must stand on its own (but there are exceptions). Another definition when referring to orthodox tea: tea that is processed in the traditional and complex manner that includes hand plucking, withering, roiling, oxidation, and firing. The opposite of orthodox is CTC (crush, tear, curl) which is a modern mechanized way of producing large volumes of lower quality tea.

How to brew WHITE TEA properly?
The true aroma, taste, and quality of white tea can be enjoyed through correct brewing. Many tea types have their own unique flavor that prefers a unique way of brewing. For ‘WESTERN’ style brewing, use a heaping teaspoon of leaves for every 8oz of 195°F water.  Brewing time is around three minutes.

'GongFu style' uses about 5 grams of tea in a 100 ml gaiwan (this is about twice the leaves and half the water then western brewing). The first quick steep is a rinse to open up the loose leaf tea leaves. As the rinse is very light and relatively bland, it is often poured over a tea pet. Because white teas do not get bitter, the next steep of white teas can be unhurried and relaxed, with 195°F water brewing in the leaves for about 5-7 seconds. With each subsequent steep, increase brewing time for one to three seconds, adjusting to taste. White tea leaves can stand up to 6 or more infusions.

How is WHITE TEA healthy?
Green tea gets most of the press, but white tea is also healthy due to some of the essential components found in White tea: Tannins, Epigallocatechin Gallate (EGCG) and other Catechins, Polyphenols, Theaflavins (TFs), Thearubigins (TRs), and Antioxidants.